Mistake. It’s a simple enough word. But one that is fraught with negative emotion. We live in constant fear of making them. Yet, mistakes are as inevitable as the sunrise.

What if we change the way we see them – Not only accept them – But expect them? Take the power away from those two little syllables that influence our decisions and rob us of opportunities. How might you have lived your life differently if you had not been afraid of making a mistake? What might have you tried? Sometimes, you’d fail, but what of the times that you would have succeeded?

What if we saw every mistake as a gift? After all, it is a chance to gain personal insight and change the way we interact with the world. Our broken places often heal stronger than ever before. Maybe, we should wear those scars with honor instead of shame.

When we were young, our first response was, “It’s not my fault.” Hopefully, we have moved beyond that reaction and learned to love ourselves enough to accept our mistakes. Loving yourself means the whole package – the bad as well as the good. It is exactly what distinguishes us from our ten-year-old selves. There is something freeing about owning our actions. By taking responsibility, we rob a mistake of the power it has over us – it’s ability to put fear in our hearts, regret in our minds and – worst of all – self doubt in our decisions

The next step is to forgive yourself. Remember that forgiveness is not a ‘get out of jail free’ card. It does not negate or erase the mistake. Instead, it says that we are human and therefore imperfect. It allows us to move forward and not be dragged down by a single choice or decision.

Mistakes are not failures: Holding on to a mistake is. It stunts our emotional growth. Every mistake holds a lesson. Ask yourself, “What might I have done differently?” Or “How can I avoid this outcome again/next time?” Observe and learn. These are the blessings mistakes bring. Then, put it behind you and move on. 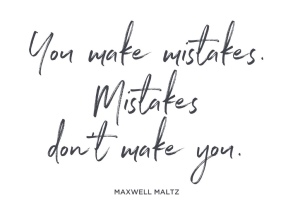 The next time you are faced with a tricky decision, weigh the consequences of making a mistake. Hopefully, it will no longer be that scary monster-under-the-bed. Maybe the perceived benefit outweighs the risk. More options will open up before you because there is no fear of being wrong. I’m not recommending that we be reckless. But, if being wrong is the only thing that’s stopping you, it might be time to dig deep and put on a brave face! Think of the possibilities!

If we are able to expect and forgive mistakes in ourselves, we will be better able to do so for those around us. And that will make the world a much better place for everyone. 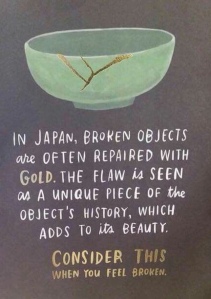 One thought on “Mistakes (I’ve made a few)”