The sexual revolution of the sixties is still raging in my head.

Being a woman of a certain age in the twenty-first century can be challenging. As hard as we try to adjust our sails to modern culture, there are certain things that just do not come easily.

We were given amazing bodies, capable of miracles and inhuman feats of strength. We shoulder the responsibility for the future of mankind, for which we endure excruciating pain. These are not only the facts -They were the expectations that molded our young minds, decades ago. But it wasn’t the whole story! The best part was left unsaid: Our bodies are also capable of giving and receiving intense pleasure.

But, from the moment the doctor announced, “It’s a girl!” we were conditioned against ever pursuing or reaching our full sexual potential. Enjoying it was completely out of the question. Our mothers had it even worse as they were coming of age. So it stands to reason that they did not have the wherewithal to encourage us to explore our sexuality. In many cases, it wasn’t even acknowledged. We were not allowed to become sexual beings at all.

Sex education was nonexistent, leaving most of us to learn through experimentation with equally ignorant partners. Information about important things like birth control and STDs were left to whispered conversations during sleepovers with our often misinformed girlfriends. There were no books written to educate young women, no sex on television and certainly no Internet.

Taboos were the norm. Girls who became pregnant were forced to leave school and give up their babies, while the rest of us silently prayed with relief that it wasn’t us. Shame was our parents’ best weapon against their own fear that their daughter might be next. Frank discussions about the discrepancies between what we were feeling and what society demanded were nonexistent. Our hormones cursed through our veins and we had no tools or knowledge to help us deal – only threats of disgrace and scandal.

Most of us fumbled our way through getting our periods, dating, losing our virginity, marriage and childbirth. The information highway opened up only when we had a husband and another human life growing inside us. This was in all accordance with society’s efforts to squash any possibility of an independent, young woman brazenly in control of her own body.

Fast forward, some forty-five years. Those of us with marriages that did not last have had to re-enter the world of dating. Fortunately for our younger counterparts, the rules have changed – or at least relaxed – but the double standard is alive and well. Sex education, information and professional advice are prevalent nowadays. Sex outside of marriage is not only accepted, but expected. Women have been given legal rights over their own bodies. The veil of shame associated with enjoying our sensuous nature has started to evaporate.

Why, then, is it so difficult for us to go out there and have a little fun? Thanks to menopause, we no longer have to fear becoming pregnant. We’ve let go of the unrealistic notion that our bodies are anything less than perfect. We’ve created life, birthed a new generation, nursed our babies. We wear our stretched skin and Caesarean scars with honor. Finally, we are comfortable. We are free.

But, are we? I don’t know a single woman my age who can truly enjoy casual sex. Or, as it is known, NSA (no strings attached). That guy who stands a little too close and touches your arm when he makes a point might look good. He may smell even better. Those familiar, tingly feelings surprise us. It’s thrilling to find out you’ve still got it, right? Another merlot takes the edge off and helps silent that little voice – the one from 1972. The one who makes you feel guilty. Irresponsible. Dangerous. Dirty.

Okay, so maybe the dangerous part can be sort of exciting. It masks the emotional tug-of-war that goes on inside your head. You want this. You need this. It feels good. But you were raised with The Waltons only to wake up and find yourself in the middle of Sex in the City. And Mary Ellen is kicking Carrie’s ass.

You psych yourself out so that the chances of enjoying yourself are diminished, even if you decide to go for it. In a cruel twist of fate, it turns out that the only one who won’t respect you in the morning is…. You!

What’s a girl to do? If you’re patient (and extremely lucky), someone will come along who is willing and able to form the kind of emotional connection you need to allow the physical closeness that follows. I suspect the formula for that chemistry is different for each of us. But, there’s no guarantee you’ll actually find it. Meanwhile, our options are limited. Stock up on batteries. Invest in a rechargeable boyfriend. Join a convent.

Celibacy is highly overrated. At our age, it’s more like use-it-or-lose-it. And, while it remains admirable for our male friends to get laid, I fear that it will never be that way for us.

I hope that our daughters and granddaughters do not face this dichotomy. I pray that they are better equipped to make choices for themselves that do not chip away at their self worth. Perhaps, their brainwashing was more like a light rinse. I want to tell them, “It’s YOUR body. Not society’s. Not your parents’. Not your lover’s. It’s your body and it is amazing. Learn how it works. Test it’s capabilities. Make your own rules and set your own limits. Or don’t. Either way, enjoy it and, most of all, be happy.”

It’s a good message and I think I’ll start reminding myself, telling my single girlfriends. Maybe, just maybe, it’s not too late for the rest of us. (Shut up, Mary Ellen…) 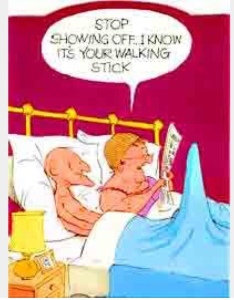 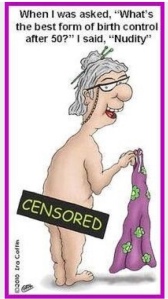