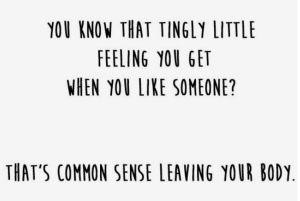 -The things a guy says at the end of a date is not necessarily indicative of how he actually feels. “I hope I see you again” doesn’t mean that he will.

-The best sex in the world is not worth the emotional wreckage of experiencing the ruin of a valuable friendship.

-There is loneliness out there so thick, you can cut it with a knife. He is most likely not purposefully being difficult – He’s just trying to cut thru the layers of his loneliness.

-You can have good sex without a relationship, but you cannot have a good relationship without sex.

-You can have a friendship with a heterosexual male, but you have to agree and make a mutual decision not to complicate it by having sex. Eventually, one of you will weaken and it’s the responsibility of the other to maintain his or her resolve.

-Sex in your sixties is different than sex in your twenties. Not everyone realizes this. If one of you is still playing by the old rules, it won’t be successful. It’s not so much that our bodies have changed, but our minds. (For the better.)

-Playing ‘hard to get’ is still a thing. And it’s effective.

-It’s okay to tell someone what you want, in a straightforward manner. Mind reading should not be part of any relationship.

-Not saying how you really feel to spare someone’s feelings is not okay. They’ll find out eventually and wish they’d known sooner. Once it’s lost, you cannot rebuild that trust.

-Everyone is terrified of the L word. If he says he loves you, he means it. Be gentle in your response.

-Most will show you what you don’t want in a man. When you find someone who shows you something amazing, pay attention. If it doesn’t work out, look for that same trait in someone else.

-If he wants to buy you dinner, by all means, let him. Put away your independent, modern woman bullshit for a moment. It’s a nice gesture. He needs to show you that he cares and that he knows how to treat you. There is a direct correlation between his doing so now and how he will treat you in the long run.

On the lighter side…..

More things I’ve learned from dating in my 60s: