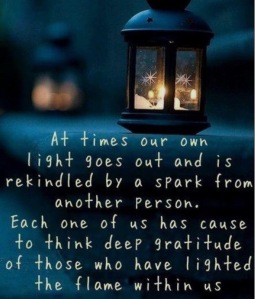 I’ve been thinking about how certain people come into our lives. Some stay long, others pass through quickly. Some make a huge impact while others are almost immediately forgotten. The universe doesn’t always give us what we want, but it invariably sends us what we need. It’s not usually the how of people coming into our lives that matters, but rather, the why.

Back when the Internet was a new phenomenon in our homes, I crossed virtual paths with many people from around the world. One of them was Don Thomas, from Texas. I had been dabbling in web page design and had created my own page as part of the former Geocities network. Don had stumbled upon it and took a moment to write me an eMail. He had served in the US Navy and he had spent time stationed in Newport, RI.

Over the next few months, we exchanged eMails and engaged in some online chats. (Remember those?) He sent me pictures of his family and talked about going to the gym every day, where he led a group exercise program. He had been diagnosed with Diabetes when he was younger and was trying to manage his dependency on insulin through exercise. He was helping others to do the same. Nice guy.

About a month later, my son, then 12, was diagnosed with Type 1 Diabetes. We were devastated. And afraid. And angry. Despite statistics to the contrary, Diabetes did not run in the family and it was all brand new – Not to mention scary. After spending 48 straight hours at the hospital, I came home to shower and change. I logged onto the computer and there was Don. He suggested that I hook up the mic and actually talk with him. It was the first, and possibly the only time I had done so. For about a half hour, he talked me through some of the things I needed to know. He asked questions and was impressed by the amount of knowledge I had absorbed already. Don assured me that everything was going to be okay and that he would be there if I needed him, once my son was discharged and glucose levels began to rule our world.

He remained a source of moral support for a several months and then, as happens, we lost touch. Computer programs were updated, service providers changed and contact information lost. I tried searching for him a few times, when Facebook became popular, but Don Thomas is a pretty common name and Texas is a very big place.

Later that same day, as I returned to the hospital to stay with my son, I was feeling pretty overwhelmed, emotionally. I might even have been engaging in a bit of a pity party, in my mind. My beautiful, healthy baby boy had, after all, been handed a life sentence of needles and chronic health concerns. As I reached for the door at the hospital entrance, I looked up to see a family approaching, on their way out. Their child bore the tell-tale signs of chemotherapy. His complexion was ashen, his small head hairless. In a split second, my perspective changed.

Two chance opportunities changed my outlook that day. Don’s online encouragement was comforting and gave me hope. The young child’s anonymous gift reminded me that life was still good – And that it wasn’t all about me.

The lessons are there and the arrows are pointing you in the right direction. The universe sends us what we need.  So, keep your eyes and ears open! 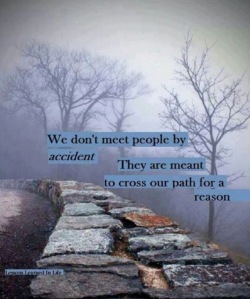 9 thoughts on “The People We Meet”