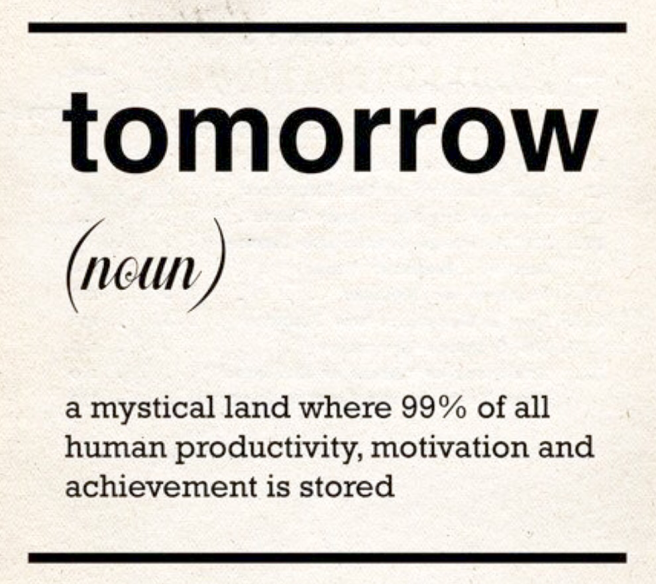 I procrastinate, therefore I am a procrastinator. Lately, I’ve been wondering: Does it necessarily have to be a bad thing? I mean, after all, the word itself begins with ‘pro,’ which is usually a good thing, right?

Just for fun, I looked up definitions of the word. Without exception, they were negative and used words like lazy, missed opportunity and my least favorite in the English language: Should. As in, to delay a task that should be done. Ugh.

According to Scientific American, “Procrastination is a well-known and serious behavioral problem involving both practical and psychological implications.” Yikes! It’s worse than I thought!

Still hopeful, I searched for the definition of crastinate. The results were less than scintillating. What I did find was an article about pre-castination, the opposite of procrastination, or the inclination to complete tasks quickly just for the sake of getting it done sooner than required. For example, you might answer an eMail immediately and fail to think about your reply. Later, a better response might occur to you, but it’s too late. (An old adage comes to mind here: Damned if you do, damned if you don’t.)

Both terms were apparently derived from ‘crastinus,’ which means belonging to tomorrow. That almost sounds romantic. Maybe I’m getting somewhere..

I am a habitual offender. My personal history of procrastination began as a child. My parents used to joke that my mantra, when chastised for not doing something, was “I was gonna.” (New England speak for I was going to.) In college, I once wrote a semester-long independent study term paper, in its entirety, the night before it was due. I was rewarded with a good grade, which only solidified my claim that “I’m good under pressure.”

Everyone procrastinates sometimes. Honestly, what is at the root of our procrastinating and what makes some of us chronic offenders?

So, now I understand some of the reasons I procrastinate. Next, I’ll figure out what to do about it. But not right now. Maybe tomorrow. I think the bird feeders are empty…

5 thoughts on “Procrastination: A Primer”